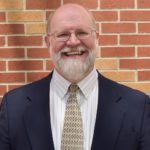 Greg and his wife of 32 years, Janet, both were born and raised in Colorado.  They attended Colorado State University in Ft. Collins where Greg graduated with a B.A. in Ancient History and Janet a B.S. in Occupational Therapy.  In 1988 they moved to St. Louis, Missouri where Greg attended Covenant Theological Seminary.  In 1991, he graduated with honors, obtaining a Masters of Divinity degree, and then received the first of three calls to serve Christ’s church as a pastor/teacher.  He served God’s people in Ft. Collins, Colorado for eight years at Cornerstone Presbyterian Church (PCA).  He then moved to Miami, Florida where he served God’s people for two years at Redlands Community Church (PCA).  During this time, he was contacted by the core group of what one day would become Bethel Presbyterian Church (OPC).  In 2001, Greg and his family moved to Broomfield, Colorado to serve at Bethel Presbyterian Church.

Favorite Verse: John 17:4: “I glorified Thee on the earth, having accomplished the work which Thou hast given Me to do.”

Favorite Quotes: “One of the problems I have with all the ‘chase your dreams!’ cheerleading from Christian leaders is not because I begrudge anyone wanting to achieve their dreams, but because I don’t think we readily see how easy it is to conflate our dream-chasing with God’s will in Christ.  You know, it’s possible that God’s plan for us is littleness.  His plan for us may be personal failure.  It’s possible that when another door closes, it’s not because he plans to open a window but because he plans to have the building fall down on you.  The question we must ask ourselves is this: Will Christ be enough?” – Jared Wilson

“If we had God’s power, we would change everything.  If we had His wisdom, we’d change nothing!”  – Scott Richardson