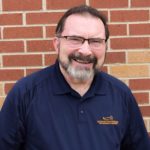 I was raised in a Christian home, and therefore don’t have a dramatic before and after story. There were times when I was very much like the prodigal son, drifting away from a faithful walk with the Lord. While I was trying to go my own way, He had other plans.

When I began a relationship with my wife (Peggy) of 38 years, she was adamant that a prospective husband be a firmly committed believer in the Lord Jesus Christ.

I have been called to serve as an Elder in 4 churches and 3 Presbyterian denominations.  I wasn’t born into Reformed ecclesiology, but I got here as fast as I could. Seriously, if “Reformed” and “Biblical” were not completely synonymous, I wouldn’t be Reformed.

I have served here at Bethel since its founding, except for a 3-year work opportunity in Milwaukee, Wisconsin. It has been a privilege to serve with our original session and now with our expanded session.

I have Parkinson’s Disease, and requested that my duties be limited.  The session granted me emeritus status in March of 2018. I still wish to serve God’s people here at Bethel as long as I can, depending on His completed work. As our denominational founder said so well, “I’m so thankful for the active obedience of Christ. No hope without it.”