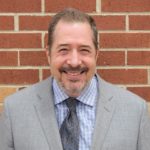 Scot Greenidge and his wife Sonnette have been members of Bethel Presbyterian Church since 2004.  Scot is an engineer with HPE.  Before moving back to Colorado, Scot worked in California and South Africa.  Scot and Sonnette have been married for 26 years and have twins, a son and a daughter.  Scot enjoys climbing, hiking, and backpacking in the Colorado mountains with his family.  He also has interests in backyard astronomy, kettle bells and strong black coffee (not necessarily in that order).

Favorite Verse: 1 Corinthians 1:30-31: “But by His doing you are in Christ Jesus, who became to us wisdom from God, and righteousness and sanctification, and redemption, so that, just as it is written, “Let him who boasts, boast in the Lord.”

Recent Books: Some books from which he has learned are: “A Clear and Present Word, the clarity of Scripture” by Mark D. Thompson, “John Owen, Reformed Catholic, Renaissance Man” by Carl R. Trueman, “Augustine Confessions” translated by F.J. Sheed, “Salvation Belongs to the Lord” by John M. Frame, “The Creedal Imperative” by Carl R. Trueman, “War and Peace” by Leo Tolstoy, translated by Richard Pevar and Larissa Volokhonsky.