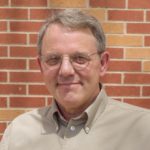 In 1960 I was born in Iowa Park, Texas. I was raised in Texas, Oklahoma, and Colorado by cowboys, Indians, sailors, airmen, baseball players, and Baptists. I served ten years in the Marine infantry where I held the billets of Platoon Sargent, Primary Marksmanship Instructor and a member of the 2nd Marine Division Marksmanship Team. I earned an A.S. in Gunsmithing at Colorado School of Trades, a B.A. in Philosophy at Colorado State University, and a M.A. in Architecture at the University of Colorado at Denver.

I became Reformed in college, in my mid 30s

I am a self-employed metal engraver.

I enjoy drawing, designing and building things, reading, writing, bourbon, and cigars. I used to play baseball, downhill ski, cross country ski, surf, skydive, scuba dive, bicycle, climb rocks and mountains, and ride saddle bronc. I still wonder in the mountains and pretend to hunt, sometimes fly fish, and tinker with my motorcycle when I can find the time.

Favorite Quote: “The more vile we are in our own eyes – the more precious He will be to us! A deep repeated sense of the evil of our heart – is necessary to preclude all boasting, and to make us willing to give the whole glory of salvation where it is due!”  –  Indwelling Sin of the Believer, John Newton

Favorite Biblical Passage: Luke 18: 9-14: “But the tax collector, standing far off, would not even lift up his eyes to heaven, but beat his breast, saying, ‘God, have mercy on me, a sinner!’ I tell you, this man went down to his house Justified…”